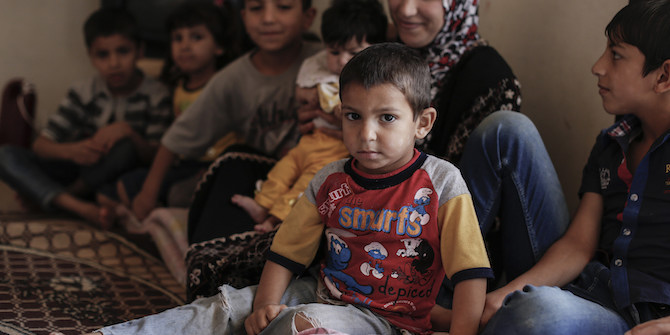 Nexus – between relief and development

Will Occupancy Free of Charge for 12 months strengthen Syrian refugees’ resilience and ability to develop positive coping mechanisms in Lebanon? And what is the impact on the housing market in Lebanon per se?
Norwegian Refugee Council has supported medium scale rehabilitation of water and sanitation infrastructure, such as water tanks and solid waste disposal sited (community support projects) and Occupancy Free of Charge (OFC) to Syrian refugees in Lebanese border areas since 2012.
The aim has been to contribute to:

a) An increased availability of minimum standard housing for vulnerable households, at affordable cost.
b) An improved security of tenure/lease for vulnerable refugee households and landlords and an enforcement of the legal rights of refugees.
c) A reduced strain on the already overstretched public infrastructure in Lebanese communities with a high refugee caseload.

In 2018 StrategyHouse.dk worked with Norwegian refugee Council to assess the intervention’s impact on

Evaluating the impact, (let alone effectiveness and sustainability) of an initiative aimed at contributing to long-term or (more) durable changes in households, markets or communities as was the case with NRC’s intervention in Lebanon, presents certain methodological challenges.

Evaluating the impact, (let alone effectiveness and sustainability) of an initiative aimed at contributing to long-term or (more) durable changes in households, markets or communities as was the case with NRC’s intervention in Lebanon, presents certain methodological challenges.
A first challenge is the role of external forces or conditions in promoting desired changes. The political context in Lebanon is complex and not in favor of any move stabilizing the refugees in the country

A second challenge is that change is typically stimulated by numerous concurrent factors and many actors. It may be difficult to determine the exact cause and effect between one specific organization’s interventions activities and impact identified.
A third challenge is the typical way that we may conceptualize programme outcomes or results. Outcomes are typically expressed as “forward progress” but outcomes might be positive also when they are “defensive” in nature, such as preventing further deterioration of public services.

To overcome these challenges, and enable project staff to reflect on the viability of the intervention’s implicit theory of change the evaluation adopted a mixed evaluation approach consisting of the following, key elements:

a) Articulation of the intervention’s theory of change and the rationale between provision of occupancy free of charge and the expected changes related to household income, behaviour, attitudes and market conditions.
b) Identification of expected and unexpected outcomes and changes relevant to the interventions direct sphere of influence.
c) Validation of outcomes, assessment of their significance and the intervention’s contribution as well as the contribution of other factors and actors.
d) Comparison between the theory of change (point A) and ‘how change really happened’ according to outcomes harvested (point B and C).

This was done using a rage on participatory approaches and tools to ensure ownership and learning among staff members as well as beneficiaries. These included desk reviews, interviews, focus groups, and analysis, interpretation and discussion of findings with NRC staff and a participatory comparison of the intervention’s initial theory of change with outcomes identified during the evaluation process.

The evaluation found that the intervention contributed to stabilize households’ socio-economic situation during the 12 months that the intervention provided occupancy free of charge. This had a positive impact on household’s food consumption as households were able to buy meat and fresh vegetables. Households also reported that they could afford to buy medicine and non-food items such as soap or clothes. The OFC reduced the financial stress and enabled households to pay accumulated debts.

The evaluation also found that occupancy free of charge had a positive impact on refugees’ social capital as staying in the same location enabled refugees to build relationships with neighbours and landlords. This was instrumental in terms of accessing information, potential jobs, help to look after children or access credit.

Yet coping and resilience post the occupancy free of charge period was challenged by an exhaustion of refugee households’ human capital, including deteriorating physical and mental health, low levels of self-esteem, limited production skills and feelings of disempowerment. So while occupancy free of charge did provide refugee households with time and mental space’ to recover from the stress of homelessness, it did not enable them to develop more sustainable coping strategies and strengthen resilience beyond to period where housing was provided free of charge.

The findings therefor led to a revision of the intervention’s theory of change and understanding of the importance to – also – invest in refugees’ human capital to maximize the benefits and sustainability of an occupancy free of charge intervention.

http://strategyhouse.dk/wp-content/uploads/2019/03/strategy-house-dk.png 335 670 Administrator http://strategyhouse.dk/wp-content/uploads/2017/11/logo_m_undertitel-UK_2017_680x152.png Administrator2019-04-05 12:33:022019-04-06 21:32:55Occupancy Free of Charge
Scroll to top
We use cookies on our website to give you the most relevant experience by remembering your preferences and repeat visits. By clicking “Accept All”, you consent to the use of ALL the cookies. However, you may visit "Cookie Settings" to provide a controlled consent.
Cookie SettingsAccept All
Manage consent

This website uses cookies to improve your experience while you navigate through the website. Out of these, the cookies that are categorized as necessary are stored on your browser as they are essential for the working of basic functionalities of the website. We also use third-party cookies that help us analyze and understand how you use this website. These cookies will be stored in your browser only with your consent. You also have the option to opt-out of these cookies. But opting out of some of these cookies may affect your browsing experience. Read more about our cookie policy
Necessary Always Enabled
Necessary cookies are absolutely essential for the website to function properly. These cookies ensure basic functionalities and security features of the website, anonymously.
Functional
Functional cookies help to perform certain functionalities like sharing the content of the website on social media platforms, collect feedbacks, and other third-party features.
Performance
Performance cookies are used to understand and analyze the key performance indexes of the website which helps in delivering a better user experience for the visitors.
Analytics
Analytical cookies are used to understand how visitors interact with the website. These cookies help provide information on metrics the number of visitors, bounce rate, traffic source, etc.
Advertisement
Advertisement cookies are used to provide visitors with relevant ads and marketing campaigns. These cookies track visitors across websites and collect information to provide customized ads.
Others
Other uncategorized cookies are those that are being analyzed and have not been classified into a category as yet.
SAVE & ACCEPT
Powered by